It has often been said that to bring attention to a controversial matter simply affirms its existence, memorializes it and gives it credibility. The corollary is to ignore it and allow wrong and negligent statements to pass as science. Instead of burying our heads in the sand, we would much rather bury bad science once and for all. We do this with the best interest of patients in mind.

In life, when things go wrong, it is human nature to search for reasons and causes. While searching for answers is a worthy endeavour, jumping to conclusions and ascribing blame without evidence is irresponsible. When this happens in medical circumstances, it is altogether misleading and unfair to patients to give them false information and send them on a wild goose chase.

If you haven’t already heard, there is a new controversial Netflix documentary making the rounds. 'Root Cause' chronicles an individual’s experience with root canal treatment and the alleged chronic illnesses he claims were a direct result from the treatment.

Unfortunately, there is a small group of naysayers that look to root canal treated teeth as being the root of all evil. Or to put it more appropriately the Evil of all Root!

This misinformation is promulgated based on the flawed focal infection research by Dr. Weston Price in the 1930s, which states bacteria trapped in dentin tubules remaining after root canal treatment cause almost any type of ‘degenerative’ disease, including kidney disease, heart disease, rheumatic fever, and multiple sclerosis. With this decade-old flawed research as his justification, it has been recommended that patients afflicted with such conditions consider extracting all their endodontically treated teeth!

Several examples of misinformation are cited in this movie. For instance, it was erroneously stated that “97% of patients with breast cancer had a root canal on the same side as the cancer.” I researched this declaration, and I found NOTHING! Not one iota of scientific evidence to support this claim. This is the equivalent of saying “100% of patients with cancer drink water.” Correlation does not equal causation.

As recently as 2013, a study published in a journal of the American Medical Association (JAMA Otolaryngology – Head & Neck Surgery) found that a patient’s risk of cancer doesn’t change after having a root canal treatment; in fact, patients with multiple endodontic treatments had a 45 percent reduced risk of cancer.

The American Association of Endodontists and Canadian Academy of Endodontics are continuing to educate its members and the general public by noting that no modern evidence exists to support claims that endodontically treated teeth serve as infection foci. In fact, untreated, infected teeth create that very cesspool from which consequences arise.

Predictable, successful endodontic treatment, using sophisticated techniques is the best strategy to reach a satisfactory conclusion. The removal of contaminants and organic substrate from within the root canal system in its totality is the indisputable biologic imperative of endodontic treatment.

Providing patients with access to comprehensive, proven facts about the safety and efficacy of endodontics and root canal treatment is the best strategy for countering misinformation. In fact, the practice of endodontics is rooted in scientific evidence that has evolved over decades. Anecdotal stories, in any realm of medicine and dentistry are hardly enough to change tried, tested and true treatment paradigms. Anecdotes can lead to hypotheses, but without empirical scientific evidence to back them up, they remain “one man’s story”.

The American Association of Endodontists website, www.aae.org has up to date content and resources which include “Root Canal Safety Talking Points”, “Myths About Root Canals”, and a “Root Canal Safety” video, all which can be shown to patients to dispel any myths and negative propaganda about root canal treatment.

As per a recent AAE communique: “Legal counsel has been consulted by the AAE and the ADA to discuss options to compel Netflix and other online hosts to remove this misleading and harmful content. After consultation, the AAE is filing formal complaints with the patient protection agencies, including state and medical boards. Additionally, the AAE is working with the ADA on formal outreach not only to Netflix, but all online platforms hosting the film, and urging removal for the safety of the public.”

Endodontic treatment has experienced, and will continue to experience some of the highest success rates found in dentistry, preventing unnecessary loss of teeth and contributing to a healthy, functional and aesthetically pleasing dentition.

Special thanks to Dr. Maneesh Sharma, President of the Canadian Academy of Endodontics and the CAE’s efforts for their position paper on this topic, Spring Hatfield, RDH for her helpful insight and the American Association of Endodontists for their powerful stand against harmful misinformation. OH

As previously published in Oral Health's March issue. This can also be found online here.

Gary Glassman, DDS, FRCD(C) The author of numerous publications, Dr. Glassman lectures globally on endodontics, is on staff at the University of Toronto, Faculty of Dentistry in the graduate departmentof endodontics, and is Adjunct Professor of Dentistry and Director of Endodontic Programming for the University of Technology, Kingston, Jamaica. Gary is a fellow of the Royal College of Dentists of Canada, Fellow of the American College of Dentists, the endodontic editor for Oral Health dental journal, Faculty Chair for DC Institute and Chief Dental Officer for dentalcorp Canada. He maintains a private practice, Endodontic Specialists in Toronto, Ontario, Canada. His personal/professional website is www.drgaryglassman.com and his office website is www.rootcanals.ca He can be reached at gary@rootcanals.ca.

Top Considerations For Your Practice Transition

It’s never too early to think about the future of your practice. Having a long-term plan ensures the hard work you put into building your business continues to pay off when you’re ready to transition and sell your practice. To make sure your team and patients are well cared for, keep these key considerations in mind as you plan for the future.

Communicating Oral Inflammation: A Chair-Side Conversation That Can Change a Life

Throughout my career I have seen communication strategies of active inflammation evolve, and now more than ever this is the foundation of client centered care, and oral health education. We are detectives with a purpose to identify active infections in a client’s mouth along with ensuring our clients are well informed of their current condition and what must take place to work towards overall health.

The Silent Pandemic: Dentistry in the Time of Opioids

Like many other professions, the dental world has wrestled with whether and how to implement vaccine policies. dentalcorp’s Dr. Gary Glassman, Chief Dental Officer, and Julian Perez, SVP, Risk Management & Compliance, offer guidance to help practices navigate vaccine policies.

International Women's Day Profile Michelle McAra. Michelle McAra wears many hats. An executive, a wife, a mother, a daughter, a sister, and the leader of an all-male Partnership Development team. 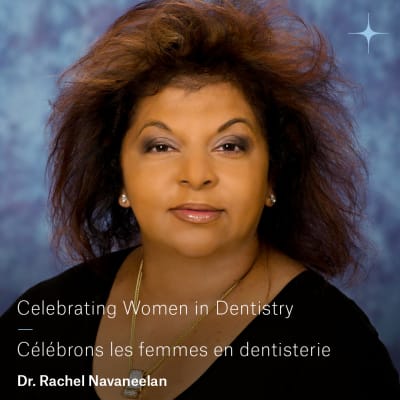 In recognition of International Women's Day, we spoke with our partner Dr. Rachel Navaneelan, to discuss how she became an inspirational woman in dentistry and a pillar in her community.